They’re up! All complete GIFs and Analyses have been posted to this site, ready for examination, and for voting. Send a quick email with your pick (by number listed in the post title) to your professor.

Don’t forget that our GIF ASSIGNMENT is due VIA EMAIL by 5 pm on WEDNESDAY, 4/19.

Send it early if you’re not sure your attachments are going to work — as noted previously, no late assignments will be accepted!

And stay tuned for ways to vote in the contest for your POPULAR FAVORITE! The contest announcement and GIF GALLERY LINK will be shared on Thursday–votes due by HIGH NOON on Sunday… Title: “In the Mood for Love” (Chinese: 花樣年華, “age of blossoms,” a reference to the fleeting years of youth), 2000

The story takes place in Hong Kong in 1962. Chow Mo-wan (Tony Leung), a journalist, rents a room in an apartment of a building on the same day as Su Li-zhen (Maggie Cheung), a secretary from a shipping company. They become next-door neighbours. Each has a spouse who works and often leaves them alone on overtime shifts. Despite the presence of a friendly Shanghainese landlady, Mrs. Suen, and a close crowd of mahjong-playing neighbours, Chow and Su often find themselves alone in their rooms. Their lives continue to intersect in everyday situations: a recurring motif is the loneliness of eating alone. The film documents the leads’ chance encounters, each making their individual trek to the street noodle stall.

Chow and Su each nurse suspicions about their own spouse’s fidelity; each comes to the conclusion that their spouses have been seeing each other. Su wonders aloud how their spouses’ affair might have begun. Su and Chow re-enact what they imagine might have happened.

Chow soon invites Su to help him write a martial arts serial for the papers. Their neighbours begin to take notice of Su’s prolonged absences. In the context of a socially conservative 1960s’ Hong Kong, friendships between men and women bear scrutiny. Chow rents a hotel room away from the apartment where he and Su can work together without attracting attention. The relationship between Chow and Su is platonic, as there is the suggestion that they would be degraded if they stooped to the level of their spouses. As time passes, however, they acknowledge that they have developed feelings for each other. Chow leaves Hong Kong for a job in Singapore. He asks Su to go with him, yet the two do not connect.

Further possibilities of connection continue in Singapore the following year, with significant musings that follow…

Three years later, Su visits her former landlady, Mrs. Suen. Mrs. Suen is about to emigrate to the United States, and Su inquires about whether the apartment is available for rent. Some time later, Chow returns to visit his landlords, the Koos. He finds they have emigrated to the Philippines. He asks about the Suen family next door, and the new owner tells him a woman and her son are now living next door. He leaves without realising Su is the lady living next door.

The film ends at Siem Reap, Cambodia, where Chow is seen visiting the Angkor Wat. At the site of a ruined monastery, he whispers for some time into a hollow in a ruined wall, before plugging the hollow with mud.

Don’t forget — we’ve got a Research Log due this Sunday night (as per our syllabus). Head over to our R-Logs site to post a working outline of your project underway.

See you in class on Monday for A Better Tomorrow!

Sung Tse-Ho (Ti Lung) works for the Triad, whose principal operation is printing and distributing counterfeit US bank notes. Ho is a respected member of the organization and is entrusted the most important transactions. Mark Lee (Chow Yun-Fat), another high-ranking member of the group, is his best friend and partner in crime.

Ho has a younger brother, Kit (Leslie Cheung), who aspires to become a police officer. Ho keeps his criminal life secret from his brother and encourages Kit’s career choice. However, Ho’s father is aware of Ho’s criminal activities and appeals to him to go straight, lest he end up in conflict with his younger brother one day.

Ho is sent to Taiwan by the boss to complete a deal. Shing (Waise Lee), a new member, is sent along as an apprentice. The deal turns out to be a trap by the Taiwanese gang. A shootout ensues in which Ho and Shing flee, pursued by local law enforcement. Ho eventually surrenders to the police in order to buy time for Shing to escape. After reading about Ho’s capture in the newspaper, Mark finds and kills the Taiwanese gang leader and his bodyguards. However, Mark’s leg is shot in the gunfight, leaving him crippled.

While Ho is in prison, Kit and his father are attacked by an assassin; in the struggle, Kit’s father is killed. Just before dying, he pleads with Kit to forgive his brother.

Ho is released from prison three years later. Remorseful and determined to start a new life, he finds work as a driver for a taxi company, run by another ex-con. Ho spots Mark during one of his shifts; in contrast to Mark’s letters, he realizes in horror that Mark has been reduced to an errand boy and janitor for Shing (who is the new leader of the Triad and set up the trap in Taiwan). During an emotional reunion, Mark asks Ho to return to his underworld lifestyle to take revenge on Shing and reclaim their positions in the organization, but Ho refuses.

Ho seeks Kit out and attempts to reconcile with his brother (who is now a member of the police force), but is rebuffed by Kit, who sees Ho as nothing but a criminal who is responsible for their father’s death. Additionally, Kit is resentful that his familial tie to Ho is preventing him from advancement in the department. In an effort to prove himself to his superiors and further distance himself from the stigma of his brother’s criminal past, Kit becomes obsessed with bringing down Shing’s criminal group, despite Ho’s warnings to stay away from the dangerous case.

Shing finds Ho and presses him to come back to his organization, offering to reinstate Mark if he returns. Ho flatly refuses. Consequently, Shing begins harassing and threatening Ho in order to get him to return, including attacking his co-workers at the taxi company, and having Mark beaten severely. Ho is dismayed but is still hesitant to take action. Meanwhile, Kit learns of a major deal being conducted by Shing and plans to take independent action against the criminals.

Ultimately, Shing’s escalating violence against his friends, a desire to protect his brother, and an impassioned speech by Mark finally convince Ho to join Mark in taking revenge on Shing…

As promised, our GIF assignment write-up has been updated to reflect the correct due-date–see the Assignments page here at the site.

Remember, you can hand in the assignment anytime before the Wednesday, 4/19, 5:00 pm, deadline, but that’s a firm deadline–GIF assignments will not be accepted after that! Your formal paper is due itself on 4/24, so time’s needed to turn around your GIF papers ASAP and also give you time to finish up the main project…

If you still are having technical problems creating GIFS, be sure to make an appointment NOW with the Digital Knowledge Center. They are very busy at the end of the semester. Technical problems won’t be a permitted reason for deadline extensions. 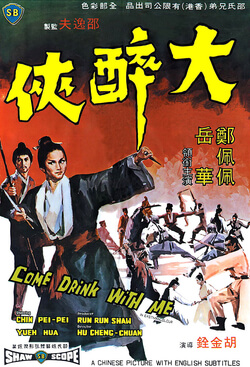 A general’s son is taken hostage and used as leverage to free a bandit leader. The general’s other offspring, a girl named Golden Swallow, is sent to rescue the son. When the bandit gang encounter the Golden Swallow in a local inn, the prisoner negotiation escalates to bloodshed and the goons are swiftly defeated.

A local drunk beggar named Fan Da-Pei acts as Golden Swallow’s guardian angel, secretly helping her avoid being ambushed at night. That morning Fan Da-Pei, whom we now know only as “Drunken Cat” tips off Golden Swallow to the bandits whereabouts. They have occupied a Buddhist monastery. Under the guise of an acolyte, Golden Swallow penetrates the temple and confronts the man who’s taken her brother hostage. During the brawl she is injured by a deadly, poisoned dart. She escapes and is rescued in the woods by Fan who nurses her back to health. While she’s convalescing, Golden Swallow learns that Fan is actually a martial arts master and a leader of a Kung Fu society, which he otherwise keeps a secret.

The monastery is led by an evil abbot, Liao Kung, who is also a kung fu master and has allied himself with the bandits. He finds out that the beggar carries a bamboo staff, and then realises that the beggar is the former student of the same master. The abbot has in fact killed their master in order to get his bamboo staff, which was rescued by Fan Da-Pei. Now Liao Kung sees the opportunity to gain control of the staff.

Fan Da-Pei is hesitant to confront Liao Kung for two reasons. First, Liao Kung’s kung fu skills are unparalleled, and he thinks he has no chances against him, or at the very least, one of them would not survive a confrontation. Second, despite his evil ways, Liao Kung has actually done a good deed to Fan Da-Pei: he persuaded the master to accept Fan Da-Pei into the Green Wand Kung-Fu school when he was a mere homeless orphan, thus giving him a chance in life. For this reason, Fan is reluctant to fight the abbot even though Fan knows about the abbot’s criminal deeds.

Here’s a panoply (or one under construction — don’t forget our deadline today, 3/26 at 5 pm via email to Prof. Fernsebner) of our practice GIFs from last week’s workshop,…  stay tuned for more!

Ermo is a hardworking village woman in the northern province of Hebei, who makes noodles to feed her husband and child. When her neighbor buys a brand new television, she is consumed by dreams of owning one herself. Desperate to own the largest television in the village, she becomes obsessive in her desire to earn money, eventually leaving the village to work in town.

The film demonstrates new trends and changes rural Chinese society experienced during the early reform era. Ermo becomes an active entrepreneur (selling dry noodles) and a consumer full of aspirations, while her elder husband still drinks his Chinese medicine and sees himself as the former head of village, a role which was meaningful during the Mao era. While Ermo is becoming more and more attracted to Xiazi (瞎子 Xiāzi), her business-oriented neighbor, and the lifestyle he represents, her husband remains impotent, both physically and metaphorically. As the film progresses it is evident that the competent capitalist-minded characters also do not find satisfaction, or that the rewards of participation in a market economy carry their own complexities.

A reminder that practice GIFs — either the ones you made in class or a new one you’ve tried out (the latter is better, as it gives you a chance to review and nail down the skills!) — are due VIA EMAIL to sfernseb [at] umw [dot] edu by THIS SUNDAY, 3/26, AT 5 PM.

Note: the syllabus says send a separate write-up. Just ignore that! The image by itself is fine.

Meanwhile, keep working on your research papers… and don’t forget that after our next film, ERMO, which we’re watching on Monday, Film Analysis #2 will be due (one week later, on Monday, 4/3).